Travelers will experience a unique festival which is very famous across the country. Every year many domestic and foreign travelers come to Kashan to have the chance of participating in this festival. We will give you time to enjoy the event and learn a lot about it.

Welcome to Shiraz, city of love and poetry!

After arriving at Shiraz and serving pleasurable breakfast, your guide will lead you to Nasir al-Mulk Mosque. Taking a memorial photo in this beautiful mosque has become the symbol of “Travel to Iran”. So it’s better to put on white chador to see cheerful color of glasses on it. Be sure your photo is the most beautiful one. You then continue on to Khan School. There, you’ll see traces of educational system hundreds of years ago, which has been formed before most European universities. Next attraction to explore is Qavam House. The beautiful building with a magical garden that all decoration dating back to Qajar period. Don’t miss seeing mirrored room and wooden ceiling in it. You move toward Vakil Bazaar, which is located in the historical heart of Shiraz and it’s the best place for walking and shopping handcrafts with the unbelievable price. The evening is an appropriate time to visit Tomb of Hafez. This tomb is located inside the fantastic garden and has spiritual atmosphere. If you talk to the locals, you’ll know Hafez better. Hafez could talk to you himself. Open his book and get your reply. Try it!

Today is the day we have been waiting for, so don’t waste your time and leave the hotel early morning. If you would like to see tombs of all great Iranian kings altogether, you certainly should visit Necropolis. Here, all tombs were carved in the heart of the mountain. Definitely, you’ve not ever seen such tombs. Don’t be surprised, tomb of Darius I is located among them. There is a structure like the Kaaba belongs to Muslim nearby Necropolis so they call it Kaaba. We make our way to Pasargadae (World Heritage Site). You’ll face to tomb of Great Cyrus, the Achaemenid Empire, there. It is worth to see. After spending some hours in the ancient world, Sarv-e Abarkooh is the next attraction we’ll introduce to you. This tree is must see site on the way to Yazd (World Heritage Site) city. It is one of the oldest creatures in the world. As time allows, take memorial photos.

We’ll start our full day tour visiting with Tower of Silence. You can get familiar with cultural and religious habits of Zoroastrians here. Ask your tour guide to explain about the way of burying the dead in the Zoroastrian religion. When you enter this place, it’s better to step slowly and think about Ahura Mazda. Next destination is Zoroastrian Temple. Certainly, an angel stands near you. We’ll make our way to Jame Mosque of Yazd. This mosque with plenty of artistic details is considered the architectural masterpiece of Timurid period. Definitely, you could spend your free time with unusual shops around the mosque. If you cross through the Fahadan old quarter, you get Amir Chakhmaq Complex. You’ll visit Water Museum. Water is the rarest element in the center of Iran. In the past, a structure called Qanat was used to carry water from the mountains to the homes. There is the history of using water in Iran behind this museum.

Today is for exploring Naein city. We’ll embark our visiting with a Cloak Weaving Workshop to know about the way of producing aba better. Ardestan is waiting for us to wander through it. You’ll visit only two levels Qanat in the world (Moon Qanat). Water of these two Qanats has never faced together after passing hundreds years. Our next stop will be Jame Mosque of Ardestan. This mosque is the second four-porch one in the Islamic world which was built in two floors in Seljuq period (11th and 12th century).  Don’t miss visiting the second floor with its fantastic view. You’ll spend overnight at Kashan and prepare yourself for experiencing next amazing day.

After having breakfast, you head out to Amin-al Dowle Caravanserai. This is located in the middle of Kashan Market and is the impressive place to drink a cup of coffee. The Agha bozorg Mosque is the most important iconic attraction worth to see in Kashan. On the way, Abbasi House is our next stop. You might be surprised to hear half beauty of this house is discovered underground. It’s better to go downstairs and see colored glasses and its decorations. Fin Garden (World Heritage Site) is your next destination. This garden is very large with tall trees and always on-water. It is the most stunning example of Iranian garden and has a quite family atmosphere. You might do something different with eating cool ice cream in the corner of this site. The traditional bath, the site of the murder of Amirkabir, is located on the one side of this amazing place which is a significant point in the history of Iran. Exploring attractions in Kashan hasn’t finished yet. Maybe Sultan Amir Ahmad Bathhouse is the loveliest one you’ve ever seen. You can get familiar with different parts of an Iranian bath. Recommend you to ask your tour guide “what is the Srbynh?”

You’ll rise early and have more energy. Today, we move toward Niasar to watch Rose Water Distillation Process closely. Rose water was produced in Iran for the first time and in addition to food intake, it was used as a medicine in medical field. Each year, Rose water is consumed for cleansing Kaaba in Mecca due to its pleasant smell. For rose water distillation, a copper pot and large pots are used which are connected by several pipes. Pay attention to your leader’s words to learn how makes rose water distillation. As time allows, you can go to the gardens full of Mohammadi flowers and pick your own ones. In each workshop, there is some rose water to test. You can test it or drink tea with this! Enjoy it! You’ll drive to Isfahan at night and prepare yourself to wonder this amazing city!

We’ll start full tour visiting of Isfahan with Chehel Sotoun Palace (World Heritage Site). This palace is located in historic city Isfahan. Chehel Sotoun is formed by twenty real wooden columns and twenty reflected columns in the water. Count them, please! Later, visit Naqsh-e Jahan Square (World Heritage Site) will leave you breathless. This square was built during the Shah Abbas period and consists of three urban parts: mosque, palace and market. Shah Mosque is the most beautiful one in Iran in terms of possessing polychrome tiles.  In front of the Shah Mosque, you can see Qeysarie Bazaar. This bazaar is a complex of several schools and mosques, mainly dedicated to the sale of carpets and other handicrafts. As you take a stroll at the bazaar, you will find a lot of tourists who are buying souvenirs. Maybe you’d like to buy. In the evening, we continue on to historic bridges, Si-o-se Pol and Khaju. Do not be surprised if you heard the song under the Khaju Bridge. Definitely, a young man of Isfahan is practicing singing. You can go near him and get acquainted with the Iranian folk song!

Continue exploring Isfahan on second day. Today, we start wandering the city with an Armenian Quarter of Isfahan.  This quarter is the only place that will remind you medieval European lanes. There are many Cafes where you can drink the best coffee in Isfahan and enjoy! After passing through the Church Alley and the Art University, you’ll arrive at the Vank Cathedral. This cathedral is the oldest one in Isfahan, whose architecture is a combination of Islamic and Armenian architecture. After visiting the church, you’ll be taken to the Music Museum. There are musical instruments in different regions of Iran, where you’ll probably listen to the Iranian music for half an hour. Iranian music invites human thinking into deep thought. So it’s better to sit in the corner and listen to think about the greatness of this music. After leaving the Jolfa Quarter, we’ll invite you to one of the most beautiful baths in Iran. There you get familiar with the old way of Iranian bathing. Do not forget to watch the beautiful paintings of this bathroom. A little bit away from Ali Gholi Agha’s Bathroom, you will arrive at the Old Iranian Gym. These gyms are said to be Zurkhaneh that in the old days, the men were preparing themselves to fight their enemies with their special movements. If you coordinate with your leader, you can take one of the sports equipment to try it out. 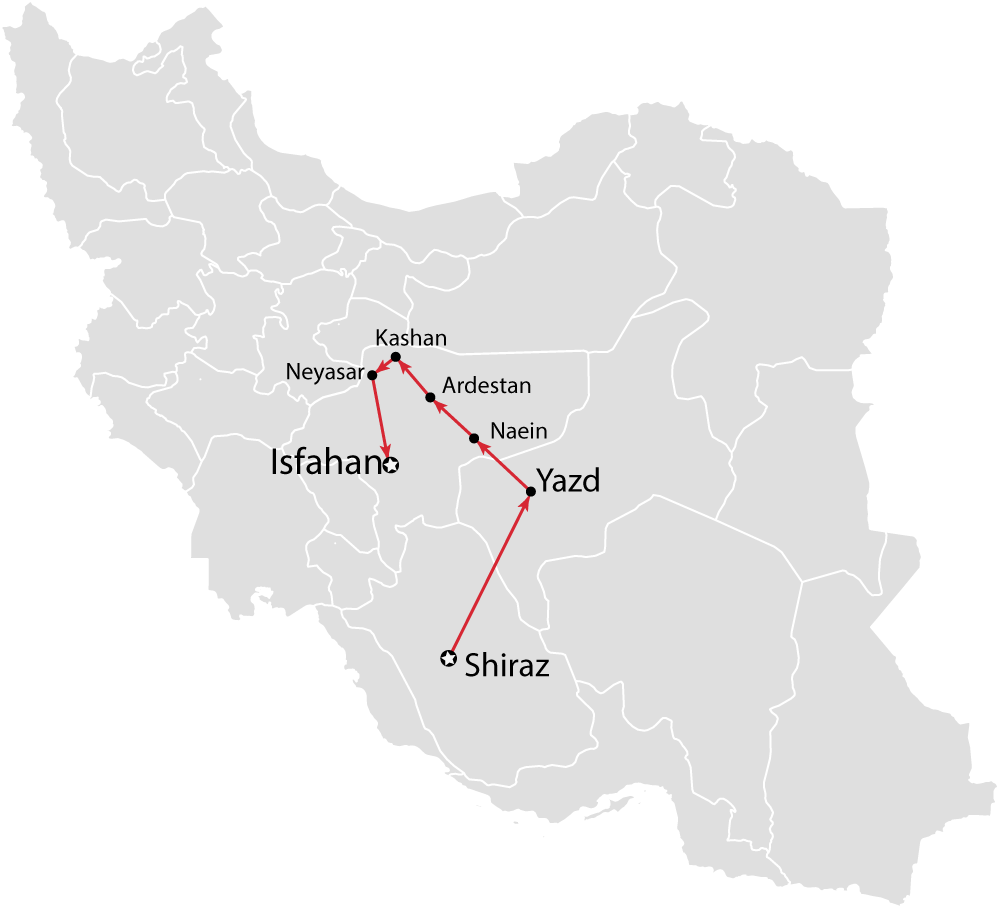 Not Covered in the Tour Price 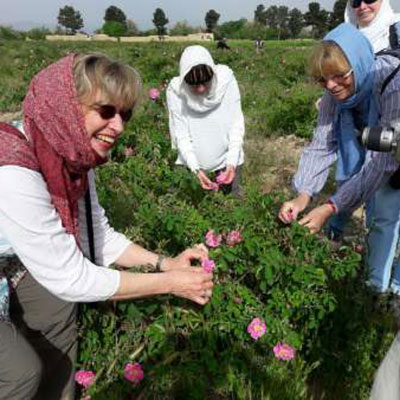 Pick flowers with your hands and take home two bottles of rosewater spray as a souvenir. You’ll be astonished to observe damask rose garden in desert areas. 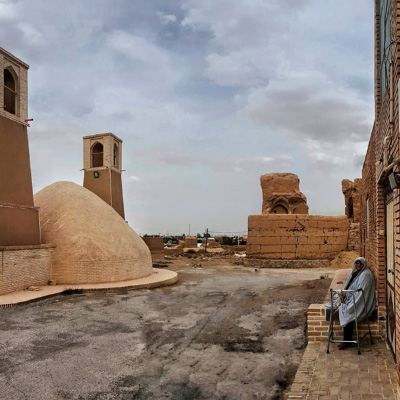 Take your time, stroll around.
Enjoy the world’s largest inhabited adobe city with mud-brick houses, winding lanes and inhale the ancient air. Do not forget to record your memorable moments there. 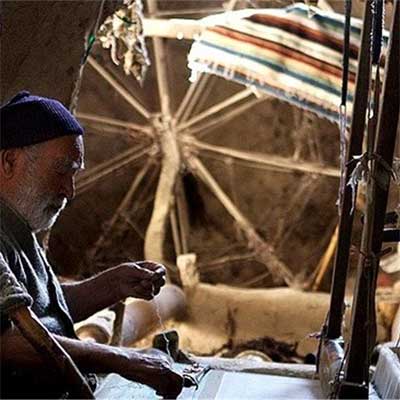 Cloak is among Iranian traditional clothes, which is long, loose and open in the front with short sleeves. Join in to this workshop to get familiar with Iranian clothes. 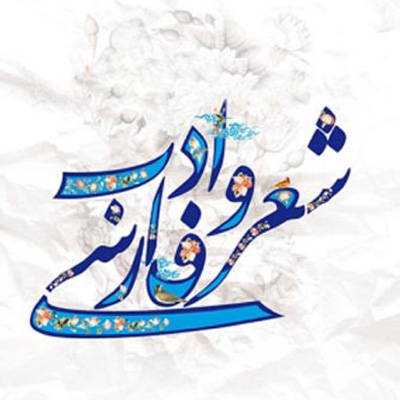 Persian or Farsi is spoken in modern-day Iran, Afghanistan, Tajikistan and other places which are among 10 ancient civilizations in the world. So let’s discover how the earliest empire has spoken?

Price is on request
Please call or email us