A fire temple in Zoroastrianism is the place of worship for Zoroastrians, often called dar-e mehr (Persian). In the Zoroastrian religion, fire, together with clean water, are undoubtedly agents of ritual purity. Clean, white “ash for the purification ceremonies is regarded as the basis of ritual life,” which “are the rites proper to the tending of a domestic fire, for the fire temple is that of the hearth fire raised to a new solemnity.” For, one “who sacrifices unto fire with fuel in his hand …, is given happiness.”

Furthermore, the temple is located in Yazd, to the west of Shiraz, where Zoroastrians have practiced their religion since about 400 BC. It is situated on the Ayatullah Kashani Avenue and is 6 kilometers (3.7 mi) away from Yazd Airport. 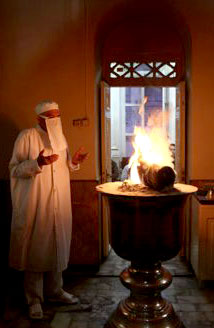 The highest grade of fire temples was first constructed in the Sasanian Empire for the reverence of fire, which is the manifestation of Ahura Mazda in the Zoroastrian faith. According to the Zoroastrian religion, this type of fire is consecrated by sixteen different sources, including the fire created by a lightning bolt. (source: Wikipedia)